TURN ONE CENT INTO $1 MILLION WITH MILLIONAIRE CHALLENGES BY POKERSTARS 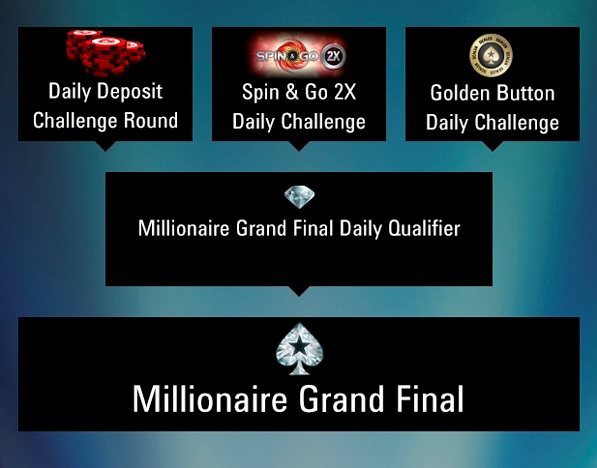 ONCHAN, Isle of Man – April 21, 2017 – PokerStars players have only four days left to lock in their seat to play for a $1 million first prize in the Millionaire Grand Final, an all-in shootout tournament where the winner will take home $1 million, as part of the ongoing PokerStars Makes Millionaires promotion, which runs until June.

To get the chance to win the life-changing amount of money, players have to complete two qualifying rounds, the first a unique challenge and the second the Millionaire Grand Final Daily Qualifier, a heads-up shoot-out tournament, in order to make it to the Millionaire Grand Final alongside just 41 other players on April 24 at PokerStars, an Amaya Inc. (Nasdaq: AYA; TSX: AYA) brand.

In the first round, players have the choice of three daily challenges, available from 00:00 ET and expiring at 23:59 ET:

Players who successfully complete one of the challenges win a seat in the second round, the Millionaire Grand Final Qualifier, which takes place the day after each challenge at 10:47 ET. The last qualifying round takes place at 10:47 ET on April 24 just ahead of the Grand Final at 14:00 ET on the same day.  The qualifier is an all-in shootout tournament with $10,000 in added prize money which sees the final three players from each daily round advance to the Millionaire Grand Final, to be held on April 24 at 14:00 ET. With the Grand Final capped at 42 players, those who make it have a 1 in 42 chance to win $1 million.

The winner of the Grand Final will pocket $1 million and will be among the first of 10 millionaires PokerStars aims to create in just 10 weeks through the PokerStars Makes Millionaires promotion.

“The unique Millionaire challenges give our players the chance to try their hand at various low cost routes to reach the exclusive Millionaire Grand Final,” said Director of Poker Marketing at PokerStars, Vadim Soloveychik. “PokerStars Makes Millionaires is a hugely exciting promotion and offers us the opportunity to give life-changing moments to our players. On April 24 at 14:00 ET, PokerStars will stream the final battle for the million on Twitch, giving poker fans across the world the chance to share in the excitement.”