An exclusive broadcast will take place tomorrow evening with the winner of the $102,000 buy-in Super High-Roller, ‘bencb789’. This broadcast will feature a live discussion of the key hands of the $102,000 event that he won, questions and answers from viewers on all topics, and general discussion about playing at the highest stakes of online poker.  Viewers will be able to send through hand histories using PokerStars’ Boom! hand re-player, and receive feedback and advice from him.

Episode number of the EPT Not Live podcast, which is now available to listen to online or download.

Days to go until Lads Night In. PokerStars and leading men’s health charity Prostate Cancer UK, are joining forces for a special one-night event in a bid to raise awareness and funds to help beat prostate cancer. Lads Night In will take place on Friday October 21st, 2016, is aimed at bringing friends in the UK and Isle of Man together to hold a poker home game and help raise money for a great cause while having fun. Participants are encouraged to donate the prize pool from their home game to Prostate Cancer UK.

Three major jackpots have been hit on PokerStars Casino, with one lucky player collecting almost $1 million! The winners are all long-standing poker players, and show that playing slots on PokerStars is a great way to complement playing poker.
More info: http://psta.rs/2d3Dq6K

For the first time ever the PokerStars Blog have taken a new approach and have posted an audio Q&A rather than written. PokerStars Team Pro, Daniel Negreanu talks about what it’s like to play a big money tournament for the first time. 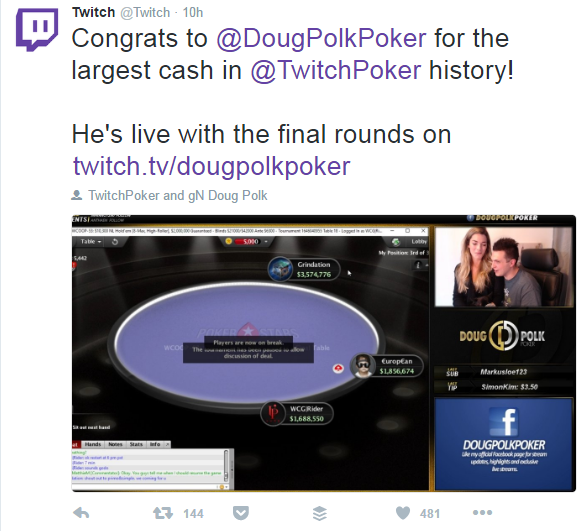 The PokerStars European Poker Tour makes its second stop of Season 13 in Malta. The event will be held at the Portomaso Casino and runs October 18-29, 2016.