PokerStars is donating all rake from the upcoming Spring Championship of Online Poker SCOOP Event 15-H: $25,000 NLHE [8-max, High Roller] $2M GTD on May 10 to the meta  charity supported by Team PokerStars Pros Liv Boeree and Igor Kurganov, Raising for Effective Giving (REG). PokerStars will also match the first $50,000 in rake collected from the tournament. REG maximises the positive impact of donations by giving to the most effective charities at reducing global suffering in a variety of fields. SCOOP runs from April 30 – May 22 and online satellites are running online at PokerStars now.

Players still have a chance to turn €10 into a PokerStars Championship Monte Carlo package worth more than €8,500 by playing fast-paced, special edition Spin & Go tournaments on PokerStars until April 10.

PokerStars MEGASTACK LONDON will take place at PokerStars LIVE at The Hippodrome Casino London in the heart of London's West End this weekend from April 7-9, 2017. The £170 buy-in tournament will have a 50,000-starting stack.

Episode number of this week’s Poker in the Ears podcast, which is now available to stream or download. This week James and Joe talk to Kenny Smaron – the winner of last month’s PokerStars Championship Main Event. 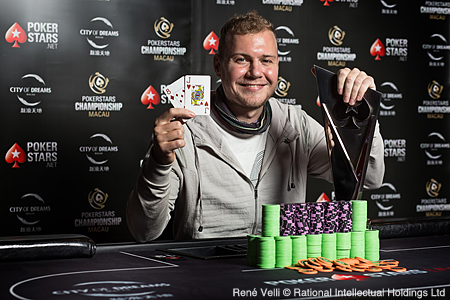 BetStars has launched its new ‘Big Call’ campaign, an exciting series of social media videos featuring a line-up of sporting stars. The creative video series sees each ambassador make a literal ‘big call’ via video phone, as they share predictions ahead of major events in the sporting calendar. Former England international footballer Wayne Bridge kicked off the campaign by making his predictions on the Premier League match between his former sides Chelsea and Manchester City, which took place last night. To see how accurate Bridge’s ‘big calls’ were go to BetStars social media channels to watch the video.