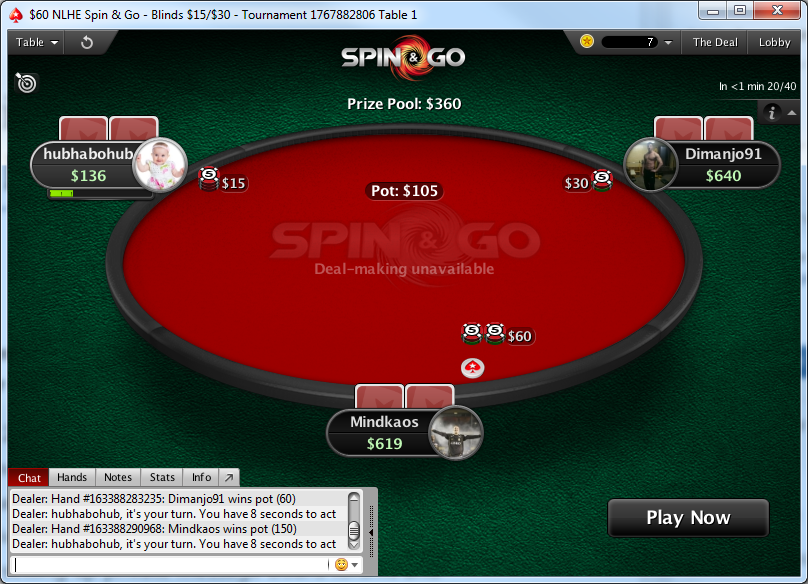 ONCHAN, Isle of Man – December 23, 2016 – Santa began his Christmas deliveries early with a stop at PokerStars, making one player a millionaire and two others $100,000 richer in a matter of minutes. Santa’s visit to a $100 Spin & Go table saw three players at PokerStars, an Amaya Inc (Nasdaq: AYA; TSX: AYA) brand, become the lucky recipients of some pre-Christmas cheer - to the tune of $1.2m in prizes. ‘Korpieworm’ scooped $1m with ‘carlmurr’ and ‘korrupt911’ walking away $100,000 richer after a fast and furious game that lasted just 48 hands and little more than ten minutes.

In the final hand, ‘Korpieworm’ called an all-in preflop raise from a short stacked ‘carlmurr’ with [5h 5d] and must have been elated to see his opponent’s [3d 3c]. The board ran out [6c 9c Ad 8h] [7s] giving ‘Korpieworm’ a straight (which he really didn’t need!).

Spin & Go tournaments are 3-max hyper turbo tournaments with just 500 chips given to each player. Each tournament has a randomly assigned prize pool giving players the chance to win up to $1,000,000 in minutes, as was the case this time around. Buy-ins range from $0.25 to $100.

’Korpieworm’ is the fourth player to win the tournament this year alone and the seventeenth since the game was launched nearly two years ago.