“As we have concluded the strategic review process, we are excited to continue focusing on improving the company and our operations. We continued to execute on our four strategic priorities during the quarter as evidenced by our strong performance,” said Rafi Ashkenazi, Chief Executive Officer of Amaya. “I am particularly pleased with our core poker business as we believe the proactive changes we made to our poker ecosystem have both substantially offset and began to reverse certain negative trends facing that business. We plan to continue leveraging this positive momentum into our casino and sportsbook offerings as we focus on becoming the world’s favorite online gaming destination and maximizing winning moments for all of our customers.”

(1) For important information on Amaya’s non-IFRS measures, see below under “Non-IFRS and Non-U.S. GAAP Measures” and the tables under “Reconciliation of Non-IFRS Measures to Nearest IFRS Measures”. As a result of Amaya’s change in presentation currency from Canadian dollars to U.S. dollars during the first quarter of 2016, the comparative and historical figures disclosed herein and in Amaya’s financial statements and management’s discussion and analysis for the three and nine months ended September 30, 2016 have been retrospectively adjusted to reflect such change as if the U.S. dollar had been used as the presentation currency for all prior periods presented.

Amaya has updated its 2016 full year guidance ranges, as previously announced on October 18, 2016, and currently expects the following:

Amaya’s unaudited condensed consolidated financial statements and management’s discussion and analysis for the three and nine months ended September 30, 2016, as well as additional information relating to Amaya and its business, can be found on SEDAR at www.sedar.com, Edgar at www.sec.gov and Amaya’s website at www.amaya.com. 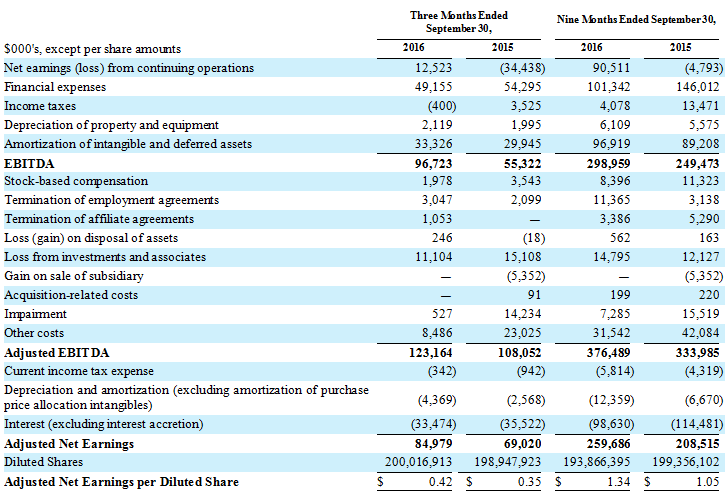 Amaya has not provided a reconciliation of the non-IFRS measures to the nearest IFRS measures included in its full year 2016 financial guidance provided in this release, including Adjusted EBITDA, Adjusted Net Earnings and Adjusted Net Earnings per Diluted Share, because certain reconciling items necessary to accurately project such IFRS measures, particularly net earnings (loss) from continuing operations, cannot be reasonably projected due to a number of factors, including variability from potential foreign exchange fluctuations impacting financial expenses, and the nature of other non-recurring or one-time costs (which are excluded from non-IFRS measures but included in net earnings (loss) from continuing operations).

Amaya is a leading provider of technology-based products and services in the global gaming and interactive entertainment industries. Amaya ultimately owns gaming and related consumer businesses and brands including PokerStars, Full Tilt, BetStars, StarsDraft, PokerStars Casino and the PokerStars Championship and PokerStars Festival live poker tour brands (incorporating the European Poker Tour, PokerStars Caribbean Adventure, Latin American Poker Tour and the Asia Pacific Poker Tour). These brands have more than 105 million cumulative registered customers globally and collectively form the largest poker business in the world, comprising online poker games and tournaments, live poker competitions, branded poker rooms in popular casinos in major cities around the world, and poker programming created for television and online audiences. Amaya, through certain of these brands, also offers non-poker gaming products, including casino, sportsbook and daily fantasy sports. Amaya, through certain of its subsidiaries, is licensed or approved to offer, or offers under third party licenses or approvals, its products and services in various jurisdictions throughout the world, including in Europe, both within and outside of the European Union, the Americas and elsewhere. In particular, PokerStars is the world’s most licensed online gaming brand, holding licenses or related operating approvals in 16 jurisdictions.

This news release contains forward-looking statements within the meaning of the Private Securities Litigation Reform Act of 1995 and applicable securities laws, including, without limitation, certain financial and operational expectations and projections, such as full year 2016 financial guidance and certain future operational plans and strategies, including, without limitation, as it relates to its operational excellence initiatives and the repayment of the deferred purchase price for the acquisition of the Rational Group and the financing of the same. Forward-looking statements can, but may not always, be identified by the use of words such as “anticipate”, “plan”, “continue”, “estimate”, “expect”, “may”, “will”, “project”, “predict”, “potential”, “targeting”, “intend”, “could”, “might”, “would”, “should”, “believe”, “objective”, “ongoing” and similar references to future periods or the negatives of these words and expressions. These statements, other than statements of historical fact, are based on management’s current expectations and are subject to a number of risks, uncertainties, and assumptions, including market and economic conditions, business prospects or opportunities, future plans and strategies, projections, technological developments, anticipated events and trends and regulatory changes that affect us, our customers and our industries. Although Amaya and management believe the expectations reflected in such forward-looking statements are reasonable and are based on reasonable assumptions and estimates, there can be no assurance that these assumptions or estimates are accurate or that any of these expectations will prove accurate. Forward-looking statements are inherently subject to significant business, regulatory, economic and competitive risks, uncertainties and contingencies that could cause actual events to differ materially from those expressed or implied in such statements. Specific risks and uncertainties include, but are not limited to: the heavily regulated industry in which Amaya carries on business; interactive entertainment and online and mobile gaming generally; current and future laws or regulations and new interpretations of existing laws or regulations with respect to online and mobile gaming; potential changes to the gaming regulatory scheme; legal and regulatory requirements; ability to obtain, maintain and comply with all applicable and required licenses, permits and certifications to distribute and market its products and services, including difficulties or delays in the same; significant barriers to entry; competition and the competitive environment within Amaya’s addressable markets and industries; impact of inability to complete future acquisitions or to integrate businesses successfully; ability to develop and enhance existing products and services and new commercially viable products and services; ability to mitigate foreign exchange and currency risks; ability to mitigate tax risks and adverse tax consequences, including, without limitation, the imposition of new or additional taxes, such as value-added and point of consumption taxes, and gaming duties; risks of foreign operations generally; protection of proprietary technology and intellectual property rights; ability to recruit and retain management and other qualified personnel, including key technical, sales and marketing personnel; defects in Amaya’s products or services; losses due to fraudulent activities; management of growth; contract awards; potential financial opportunities in addressable markets and with respect to individual contracts; ability of technology infrastructure to meet applicable demand; systems, networks, telecommunications or service disruptions or failures or cyber-attacks; regulations and laws that may be adopted with respect to the Internet and electronic commerce and that may otherwise impact Amaya in the jurisdictions where it is currently doing business or intends to do business; ability to obtain additional financing on reasonable terms or at all; refinancing risks; customer and operator preferences and changes in the economy; dependency on customers’ acceptance of its products and services; consolidation within the gaming industry; litigation costs and outcomes; expansion within existing and into new markets; relationships with vendors and distributors; and natural events. Other applicable risks and uncertainties include those identified under the heading “Risk Factors and Uncertainties” in Amaya’s Annual Information Form for the year ended December 31, 2015 and “Risk Factors and Uncertainties” and “Limitations of Key Metrics and Other Data” in its Q3 2016 MD&A, each available on SEDAR at www.sedar.com, EDGAR at www.sec.gov and Amaya’s website at www.amaya.com, and in other filings that Amaya has made and may make with applicable securities authorities in the future. Investors are cautioned not to put undue reliance on forward-looking statements. Any forward-looking statement speaks only as of the date hereof, and Amaya undertakes no obligation to correct or update any forward-looking statement, whether as a result of new information, future events or otherwise, except as required by applicable law.

This news release references non-IFRS and non-U.S. GAAP financial measures, including QNY, Adjusted EBITDA, Adjusted Net Earnings, Adjusted Net Earnings per Diluted Share, and the foreign exchange impact on revenues (i.e., constant currency). Amaya believes these non-IFRS and non-U.S. GAAP financial measures will provide investors with useful supplemental information about the financial performance of its business, enable comparison of financial results between periods where certain items may vary independent of business performance, and allow for greater transparency with respect to key metrics used by management in operating its business.  Although management believes these financial measures are important in evaluating Amaya, they are not intended to be considered in isolation or as a substitute for, or superior to, financial information prepared and presented in accordance with IFRS or U.S. GAAP. They are not recognized measures under IFRS or U.S. GAAP and do not have standardized meanings prescribed by IFRS or U.S. GAAP. These measures may be different from non-IFRS and non-U.S. GAAP financial measures used by other companies, limiting its usefulness for comparison purposes. Moreover, presentation of certain of these measures is provided for year-over-year comparison purposes, and investors should be cautioned that the effect of the adjustments thereto provided herein have an actual effect on Amaya’s operating results. In addition to QNY, which is defined below under “Key Metrics and Other Data”, Amaya uses the following non-IFRS and non-U.S. GAAP measures in this release:

To calculate revenue on a constant currency basis, Amaya translated revenue for the three and nine months ended September 30, 2016 using the prior year's monthly exchange rates for its local currencies other than the U.S. dollar, which Amaya believes is a useful metric that facilitates comparison to its historical performance.

Amaya defines QAUs as active unique customers (online, mobile and desktop client) who generated rake, placed a bet or otherwise wagered (excluding free play, bonuses or other promotions) on or through an Amaya poker, casino or sportsbook offering during the applicable quarterly period. Amaya defines unique as a customer who played at least once on one of Amaya’s real-money offerings during the period, and excludes duplicate counting, even if that customer is active across multiple verticals (e.g., both poker and casino). Beginning with its second quarter 2016 results, Amaya no longer provides PokerStars-only QAUs as a result of the recently completed migration of the Full Tilt brand and customers to the PokerStars platform.

Amaya defines Customer Registrations as the cumulative number of real-money and play-money customer registrations on PokerStars and Full Tilt.

For additional information on Amaya’s key metrics and other data, see the Q3 2016 MD&A, including under the headings “Limitations on Key Metrics and Other Data” and “Key Metrics”.