The total guaranteed for PokerStars Championship Barcelona which takes place August 15-27.  Hollywood star and PokerStars ambassador Kevin Hart has announced that he will be attending Spain’s biggest poker event of the year and is looking to swipe the crown from reigning Super High Roller champion Fedor Holz. Satellites for both the Main Event and the National Championship are currently running on PokerStars, where players can qualify for as little as €1.

Online Day 1B and Day 1C of the PokerStars Sunday Million Live take place this Sunday, June 25. The buy-in is €215 with the top 10% of the field making it through to Day 2, which will be played live at King’s Casino Rozvadov, Czech Republic. Qualifiers to Day 2 will receive the min-cash amount of €400 credited to their PokerStars accounts and play their chip stack further into the money in the €1 Million guaranteed event. The live Day 2 takes place at King’s Casino on Saturday, September 2 at noon.

Team PokerStars Pro members Jason Mercier and Daniel Negreanu reached the final table of the World Series of Poker (WSOP) $10,000 HORSE Championship. Mercier busted in fifth place, collecting $83,415, while Negreanu departed just before him in sixth for $61,667. The title and bracelet went to American David Bach.

PokerStars NJ sponsored player Damon Ferrante defeated a field of 188 players to win the Borgata Poker Deepstacks Challenge $200+$30 Deepest Stack NLH (Re-Entry) for $7,200. Ferrante will be donating 50% of his earnings, a total of $3,600, to St. Jude’s Children’s Hospital. The total prize pool was $36,472.

Episode number of this week’s Poker in the Ears Podcast, which is now available to stream or download. Daniel Negreanu discusses his Vegas vlogs and celebrates his string of cashes at the World Series of Poker. 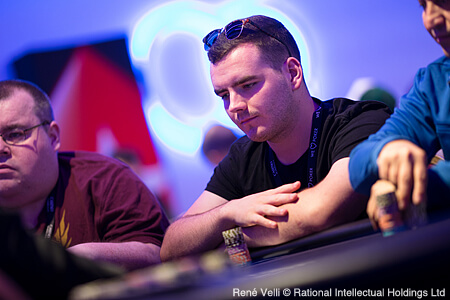 Daniel Williams, aged 22 from the UK, finished in first place in a freeroll bounty at PokerStars and won a package to PokerStars Festival Marbella, including Main Event entry, hotel and travel.