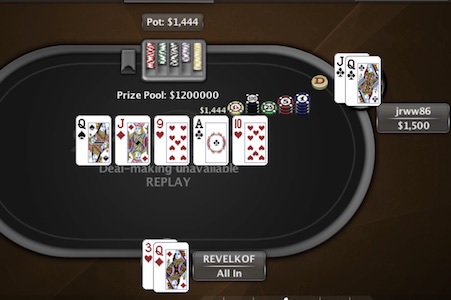 ‘jrww86’ was up against ‘netspider_by’ from Belarus and Russian ‘REVELKOF’, who both finished with $100,000 in runner-up prize money.

‘netspider_by’ was the first to find themselves short stacked and was the first to go when their Kd 6c lost out to ‘REVELKOF’s 6s Qc, which hit a club flush to take the chip lead. Over the next 14 hands, ‘jrww86’ chipped away at the Russian’s stack to eke out a lead. The final hand came at the 30/60 level when ‘REVELKOF’ went all-in with top pair on a Qs Jd 9h flop holding Qd 3h only to find that ‘jrww86’ had flopped two pair with Qc Jc. The hand held up and won ‘jrww86’ the $1,000,000 first prize.