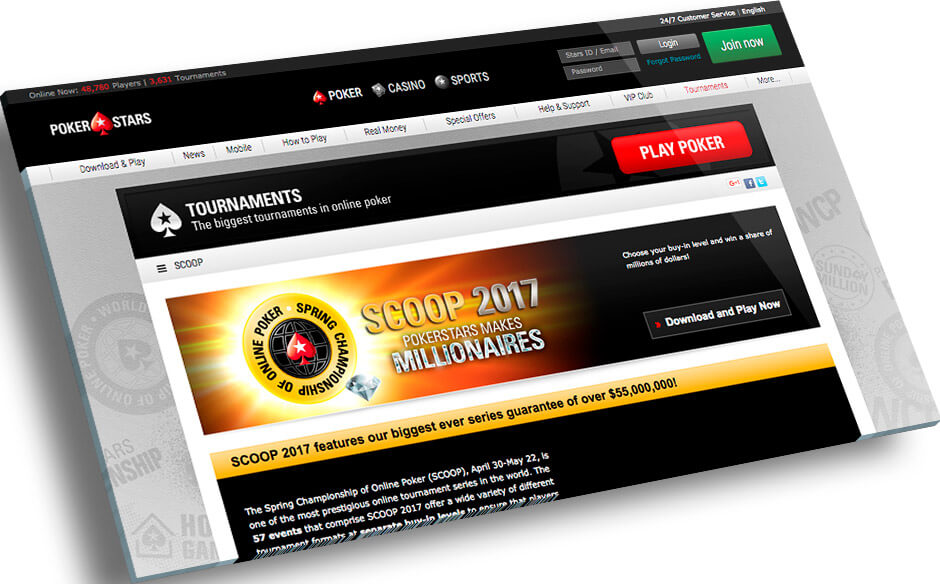 ONCHAN, Isle of Man – May 22, 2017 – PokerStars, an Amaya, Inc. (Nasdaq: AYA; TSX: AYA) brand, hit a new online poker tournament high yesterday when it achieved record-breaking total prize pools of more than $39 million in a single day, smashing the guarantee of $28 million by almost 40 per cent. The total prize pools made it the biggest day the online poker industry has ever seen.

The Spring Championship of Online Poker (SCOOP) events yesterday delivered more than $29.5 million in prize pools. The High Stake Main Event smashed its $5 million guarantee to reach a $6,930,000 prize pool, meaning that there is more than $1.3 million set aside for 1st place and a massive $960,000 for the runner up when the tournament concludes tomorrow.

“Thank you to all our players who participated in our tournaments making it possible for us to break these records,” said Severin Rasset, Director of Poker Innovations and Operations at PokerStars. “Being able to offer the biggest day in the online poker history is a victory for everyone in poker and we’re delighted that so many of our players joined us to make this a reality. We are proud to have been able to provide so many winning moments to so many of our players and we’re looking forward to providing even more for a long time to come.”

Another millionaire is also expected in the High Stakes Event 01 Phase 2 tournament, which has $1 million set aside for the winner and $700,000 for second place. Team PokerStars Pro Igor Kurganov finished in 52nd place for $10,012. The tournament resumes today at 12:30 ET.

Yesterday’s total prize pool of $39 million surpasses the previous biggest day for online tournament poker pay outs – May 22, 2016 - which paid out $35 million. In NJSCOOP, the High Stakes Main Event also exceeded its $200,000 guaranteed, hitting a prize pool of $204,000 while the biggest non-SCOOP tournament was the Super-Sized Sunday’s $600,000 prize pool.