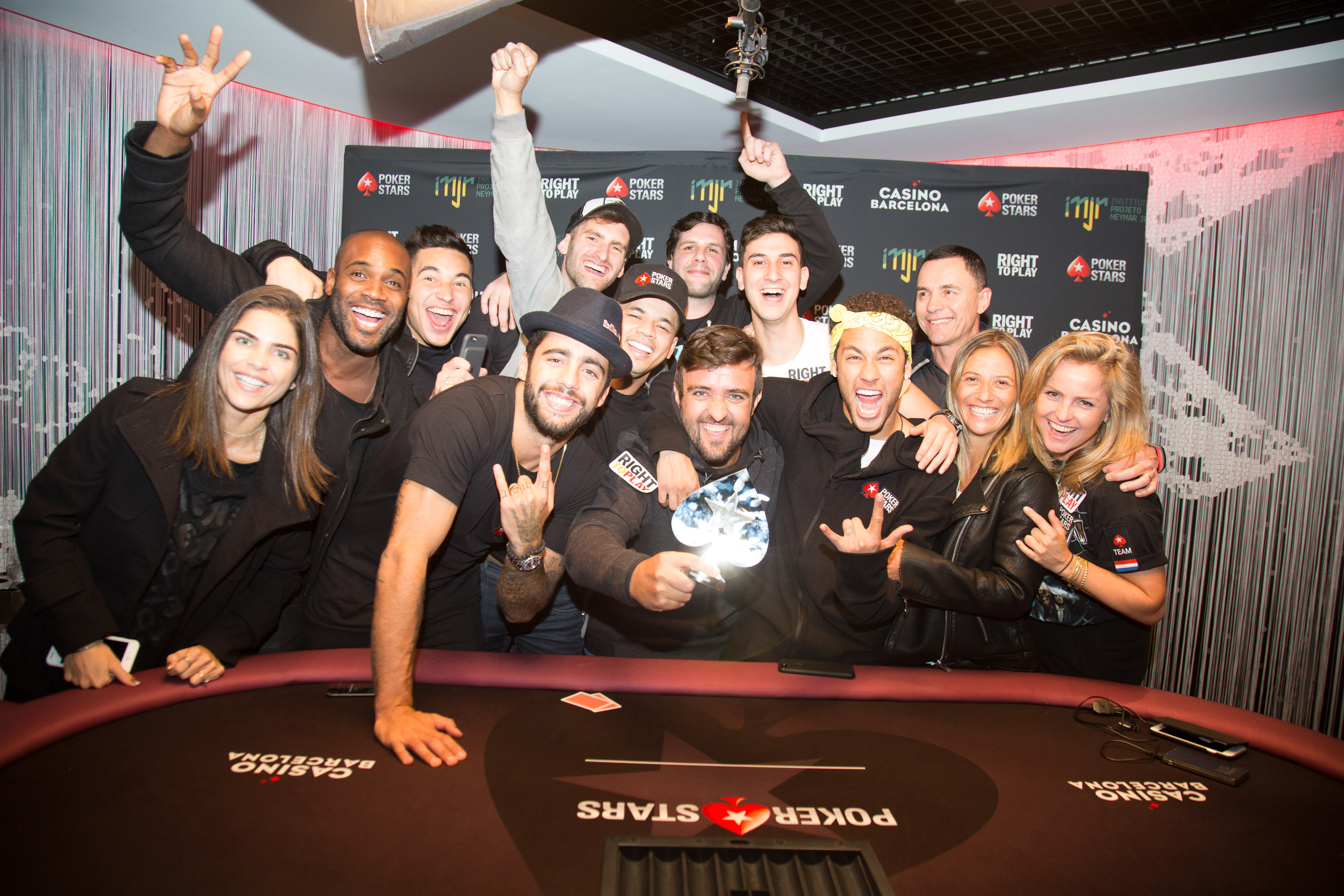 ONCHAN, Isle of Man – March 20, 2017 – Team PokerStars Pro Andre Akkari was the star of the Neymar Jr Charity Home Game held in Spain on Thursday night, defeating a field of 15, winning the trophy and a piece of the €52,300 prize pool for his charity.

Neymar Jr and his friends competed for a slice of the prize pool in order to donate the winnings to Neymar Jr's own charity, The Neymar Jr Institute. Olympic hockey star Fatima Moreira de Melo and Andre Akkari, both members of Team PokerStars, an Amaya Inc. (Nasdaq: AYA; TSX: AYA) brand, played for children’s charity Right To Play.

At the beginning of the tournament, Neymar announced €100 rebuys for the first hour to donate to the Neymar Jr Institute. “I had so much fun taking on my friends at the poker table," said Neymar Jr. "It's such a great feeling sitting down to play poker with my friends in a fun-filled atmosphere knowing that the proceeds are going towards such a great cause. I had such a great night and was so pleased to see my poker coach, Andre Akkari, take the win.”

Fans can check out all the action from the star-studded home game in a video posted on Neymar Jr’s Facebook page.

“I travel all over the world playing poker in big tournaments, but it’s not every day I get to participate in tournaments like these, giving away money to charity for incredible causes," said home game hero Akkari. "I am so happy to see that this money will go towards global sports and education charity, Right To Play, to help hundreds of thousands of children in some of the poorest parts of the world, using the power of sport and play to help educate and empower those most in need to overcome the impact of poverty, conflict and disease.”

Online qualifier Diego Garcia Bello from Galicia, Spain, also joined the superstar footballer and friends for his first ever live poker tournament after winning his place in the home game for free at PokerStars. Bello, who made the final table, left with his head held high in 7th place and donated €2,300 to charity.

“Getting the opportunity to play Neymar and his friends tonight was a very good experience for me,” said Bello. This was not the first time the qualifier played against Neymar Jr, as he had previously competed against him online at PokerStars. When asked about his experience of playing Neymar live for the first time, he said: “I met him online but meeting him in real life is different, another kind of emotion. He’s so relaxed and friendly.”

Up until now, Bello only played online at PokerStars. When asked about how he found his first live experience, he said: “Live poker is very entertaining. I intend to play more satellites online at PokerStars so I can qualify for live events in locations around the world, such as the upcoming PokerStars Championship Barcelona in August this year.”

Helping Hands is the PokerStars and Full Tilt Corporate Giving Programme which provides support to charities whilst galvanising the support of the brands, players and staff.  Helping Hands is the embodiment of the Full Tilt and PokerStars ethos that working with our communities and our people to make a difference is an essential part of being a responsible business and the right thing to do.  Helping Hands works with charities locally where we have an office presence and globally through our charity partners such as CARE International and Right To Play – helping to recover from international emergencies and using the power of sport and play to transform children’s lives.  Since its launch in 2013, Helping Hands has contributed more than $7 million to charities around the world.

About The Neymar Jr Institute

The Neymar Jr Institute was established in 2014 and aims to help thousands of underprivileged children and their families from São Paulo by providing sports and school activities to develop skills that have an effective impact on their quality of life, helping to overcome social problems such as violence and crime.