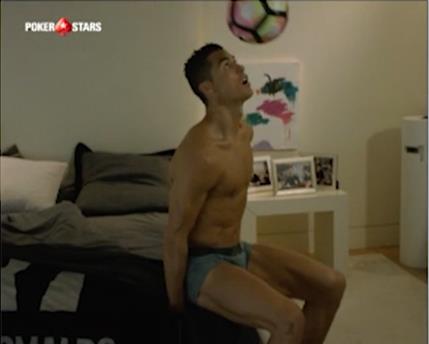 Ronaldo and Wade battle it out by responding to challenges set by the other in a series of playful yet competitive #raiseit videos. The sporting pair showcase impressive football and basketball skills and tricks as they take turns to #raiseit to the next level with inventive video challenges in a bid to out-do each other.

The concept behind the #raiseit campaign is a fun take on the poker mentality of raising the pot or stakes in order to ‘one-up’ your opponent. It showcases the competitive  nature of poker and sport, and the focus, tenacity and endurance needed to succeed in both activities.

Ronaldo said: “Challenges often bring out the best in people and #raiseit is all about that so I’m really happy to be part of it. Creating these videos allowed Dwyane and I to showcase some crazy tricks, and take each other on outside of the pitch and court.  I think I have set the bar high for Dwyane, so we’ll see what kind of skills he brings to the table in the next few months.”

Dwyane said: “I really enjoyed coming up with unique #raiseit ideas to out-smart Ronaldo. The challenge not only pushes boundaries but gets your imagination going. It gets you thinking, ‘What can I do to get that person fired up? And how can I think ahead and outsmart their response before they even act?’ It’s going to be a lot of fun to see how it plays out.”

Simon Tilbury, Associate Director of Advertising for PokerStars, said: “The first instalment of #raiseit featured Neymar Jr and Brazilian Ronaldo, and delivered over 40 million video views and record engagement scores for us. Now with Cristiano Ronaldo and Dwyane Wade showing us their ‘poker thinking’ I’m confident they’ll bring the PokerStars brand to an even wider audience.”

The series of 14 unique #raiseit videos launched today (November 23) with Dwayne’s video in the ‘Superstar Wake Up’ themed round. Ronaldo’s retaliation will go live tomorrow (November 24). The videos will be posted on Ronaldo and Wade’s social media channels over a three-month period.